The practise of iconoclasm is one of the most striking features of hardline Islamism. An Egyptian Salafi Sheik by the name of Murgan Salem believes that it is necessary for the Egyptian Government to destroy all the pyramids, statues of ancient pharaohs and all other antiquities which are generally associated with universal heritage. The reasoning which this Sheikh renders is that this move will help in curbing idolatry and in destroying the remnants of Paganism in Islamic Egypt.

Murgan Salem also justifies the sacrilegious act of destruction of the Great Buddha Statue in Afghanistan by Islamist militants. He believes that by destroying the statue, the Islamists did great service to Allah and Islam because this statue was held in high reverence and worshipped by 800 million Buddhists based in different parts of the world. Since the statue has now been destroyed, people would no longer be able to insult Allah by worshipping objects other than him. It’s indeed a tragedy that Islamists view Prophet Muhammad’s cleansing of the Kaaba as an act of unilateral iconoclasm and choose to disregard the Quranic commandment of safeguarding churches, synagogues, mosques, cloisters and all those places where God’s name is invoked (22:39). 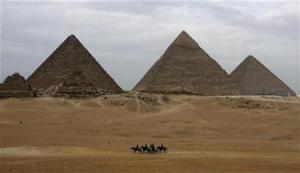 The Pyramids of Giza located on the outskirts of the Egyptian city of Cairo. (Reuters)

The practise of Islamism has a deep connect with the history of Muslim civilization. When the Muslim armies were shuttling between the three continents of Asia, Africa and Europe; countless places of worship were razed to the ground as a result of Islamic zealotry. The worst sufferer was possibly the Indian Civilization which saw wide scale destruction of its temples by plunderers like Mahmud of Ghazni who desecrated temples and carried away all the wealth to develop his own kingdom and to utilize the loot money to sponsor raids against fellow Muslim kingdoms. The world has come a long way since then with the enactment of universal human rights and other revolutionary measures promoting egalitarianism but what continues to bind Islamism and iconoclasm are history books which are written with such bias that they carry on with their praise of desecrators.

The challenge before the Islamic civilization lies in accepting the misdeeds of its forefathers. At the turn of millennium, even the Vatican issued an apology regarding the dastardly acts which the Church carried out in the name of Christ. The secular activists in the Arab world have to take up the mantle of taming the hateful ideology of men like Murgan Salem and others who want to destroy heterogeneous character of the world and replace it with a sickening and radicalized interpretation of the Sharia where religion is more of a curse than blessing.