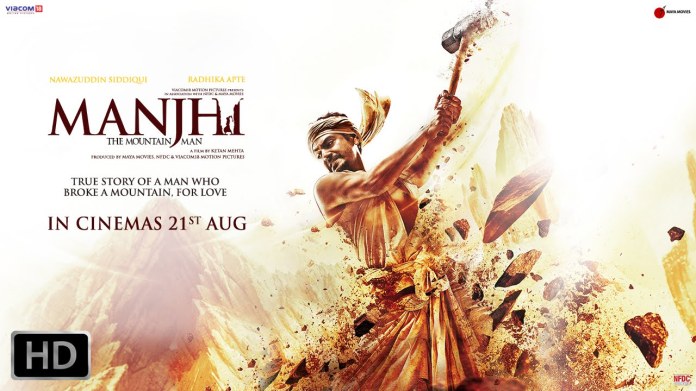 Manjhi executes the improbable task of tearing apart a mountain over a period of 22 years, while braving several hardships including constant taunts from his father, extreme weather conditions, political corruption, police abuse and most importantly, physical torment and pain. (Image: Viacom 18)

A near fourteen-month long hiatus came to an end on August 27, 2015! I last visited a movie theatre in March 2014 to watch Kangana Ranaut starrer Queen. This time around I accompanied two colleagues to see Manjhi – The Mountain Man. The film is inspired by the life of Dashrath Manjhi, a labourer belonging to Gehlor village in Bihar. Manjhi’s role has been enacted by none other than Nawazuddin Siddiqui who is fast climbing the ladder of recognition in Bollywood, an industry which is constantly under the lens of hard-to-please film critics.

After a long absence from the cinema hall, an entry into one provided a grandiose feeling. The film’s plot revolves around Manjhi’s obsession to avenge his wife’s accidental death, which occurred after falling off a mountain in his native village. Manjhi executes the improbable task of tearing apart a mountain over a period of 22 years, while braving several hardships including constant taunts from his father, extreme weather conditions, political corruption, police abuse and most importantly, physical torment and pain.

The film has an accompanying theme of caste violence, which manifests itself in the form of murder, sexual assault and exploitation of backward caste villagers by the dominant upper caste. Eventually, a villager turned rebel initiates a Naxal attack to seek retribution. Even amid all this deviation, Manjhi keeps his eyes firmly set at destroying the mountain that took his love away from him.

Nawazuddin Siddiqui’s performance is praiseworthy as he has effortlessly depicted an ageing but raging man’s desire to fulfil his only ambition. His body language and dialogue delivery kept changing through various portions of the film as time progressed and turned Manjhi older. However, a silly factual error left me a little miffed!

There is a sequence in Manjhi where then Prime Minister Indira Gandhi visits village Gehlor and delivers a speech. What needs to be criticised is not the apparent comic picturisation of the said sequence, but the content of Indira Gandhi’s purported speech in which she is shown referring to the Congress party’s hand symbol. The election symbol depicting a hand was brought in by the Congress in the post-Emergency era as my acquaintance correctly pointed out during the course of the movie. The sequence showing Indira Gandhi was shown as having occurred prior to the Emergency, which is also a part of the movie.

This leaves the viewer with a very important question: Why do Indian filmmakers leave research and facts bhagwaan bharose? Rakeysh Omprakash Mehra’s much acclaimed Bhaag Milkha Bhaag also had several significant errors, which included a thrilling race during the climax inside Lahore’s Gaddafi stadium at a time when the stadium was not even named after the Libyan dictator! Research cannot be compromised when one is dealing with a film that has been inspired by real life figures like Milkha Singh or Dashrath Manjhi.

A filmmaker cannot afford to get the spelling of a city wrong on screen as had allegedly happened in Bhaag Milkha Bhaag. Nor can he make Indira Gandhi speak about an election symbol which did not exist at that point in the movie. These mistakes don’t alter the course of the film as they are negligible in stature, but they definitely make the filmmaker appear a bit foolish in front of his viewer, who expects solid background research.

Nevertheless, such mistakes are common and ingrained in Indian filmmakers. It’s about time that they took their research more seriously. There should also be a debate when it comes to the length of Bollywood films, in particular, the biographical ventures. My two colleagues were of the opinion that Manjhi – The Mountain Man should have received a more documentary-like treatment. The run time could have surely been shortened as the second half becomes a bit harsh to bear for the viewer, who is subjected to two back-to-back sequences of political corruption and police arrest, which almost prevent Manjhi from completing his task. But the film is a memorable one-time watch.

Nawazuddin Siddiqui is the obvious reason why one should pay the nearest movie theatre a visit so that they can become acquainted with the “shaandar, zabardast, zindabad” spirit of the man called Dashrath Manjhi.

(This article was originally published in DailyO.)